1.3 The Nanticoke Lenape the Grandfather Tribe

In this section we will discuss my Tribe and  their role in Americas Story and their connection with the Spanish Moors and other colonizer groups. Thanks to over 15 years for my fellow TurtleGang.NYC please support.

Dr Sam Beeler of the Sand Hill Band Lenape Cherokee Addresses NJ Commission on Indian Affairs assist the Nanticoke Lenape in the quest for recognition as a Sovereign Tribe.

Tribal Nation a green light to proceed in its civil rights lawsuit against New Jersey’s Attorney General John Hoffman, who told the federal government that the tribe was not considered a “recognized” tribal nation.

THE TRAGIC TALE OF THE LENAPE THE ORIGINAL NATIVE NEW YORKERS

The story of the Lenape, the native people of New York Harbor region, and their experiences with the first European arrivals — the explorers, the fur traders, the residents of New Amsterdam.

Before New York, before New Amsterdam – there was Lenapehoking, the land of the Lenape, the original inhabitants of the places we call Manhattan, Westchester, northern New Jersey and western Long Island.  This is the story of their first contact with European explorers and settlers and their gradual banishment from their ancestral land.

Fur trading changed the lifestyles of the Lenape well before any permanent European settlers stepped foot in this region. Early explorers had a series of mostly positive experiences with early native people.  With the Dutch settlement of New Amsterdam, the Lenape entered into various land deals, ‘selling’ the land of Manhattan at a location in the area of today’s Inwood Hill Park.

But relations between New Amsterdam and the surrounding native population worsened with the arrival of Director-General William Kieft, leading to bloody attacks and vicious reprisals, killing hundreds of Lenape and colonists alike. Peter Stuyvesant arrives to salvage the situation, but further attacks threatened any treaties of peace.  But the time of English occupation, the Lenape were decimated and without their land.

And yet, descendants of the Lenape live on today in various parts of the United States and Canada.  All that and more in this tragic but important tale of New York City history.

The long road of the Lenape. This 1978 map shows the path of their various relocations across the country in comparison with the relocation path of the Cherokee.

Henry Hudson’s interaction with the native people of the area would much later inspire a host of fanciful depictions.

From a 1909 postcard for the Hudson-Fulton Celebration

From an old textbook:

“‘Designed and etched for Bancroft’s History of the United States’ Written on image: ‘Sept. 7 1609’

From a 1915 textbook ‘A First Book In American History’ — “Hudson’s ship anchored again opposite the Catskill Mountains, and here he found some very friendly Indians, who brought corn, pumpkins, and to-bacco to sell to the crew. Still farther up the river Hudson visited a tribe onshore, and wondered at their great heaps of corn and beans. The chief lived in around bark house. Captain Hudson wasmade to sit on a mat and eat from a red wooden bowl. The Indians wished him to stay all night; they broke their arrows and threw them into the fire, to show their friendliness. 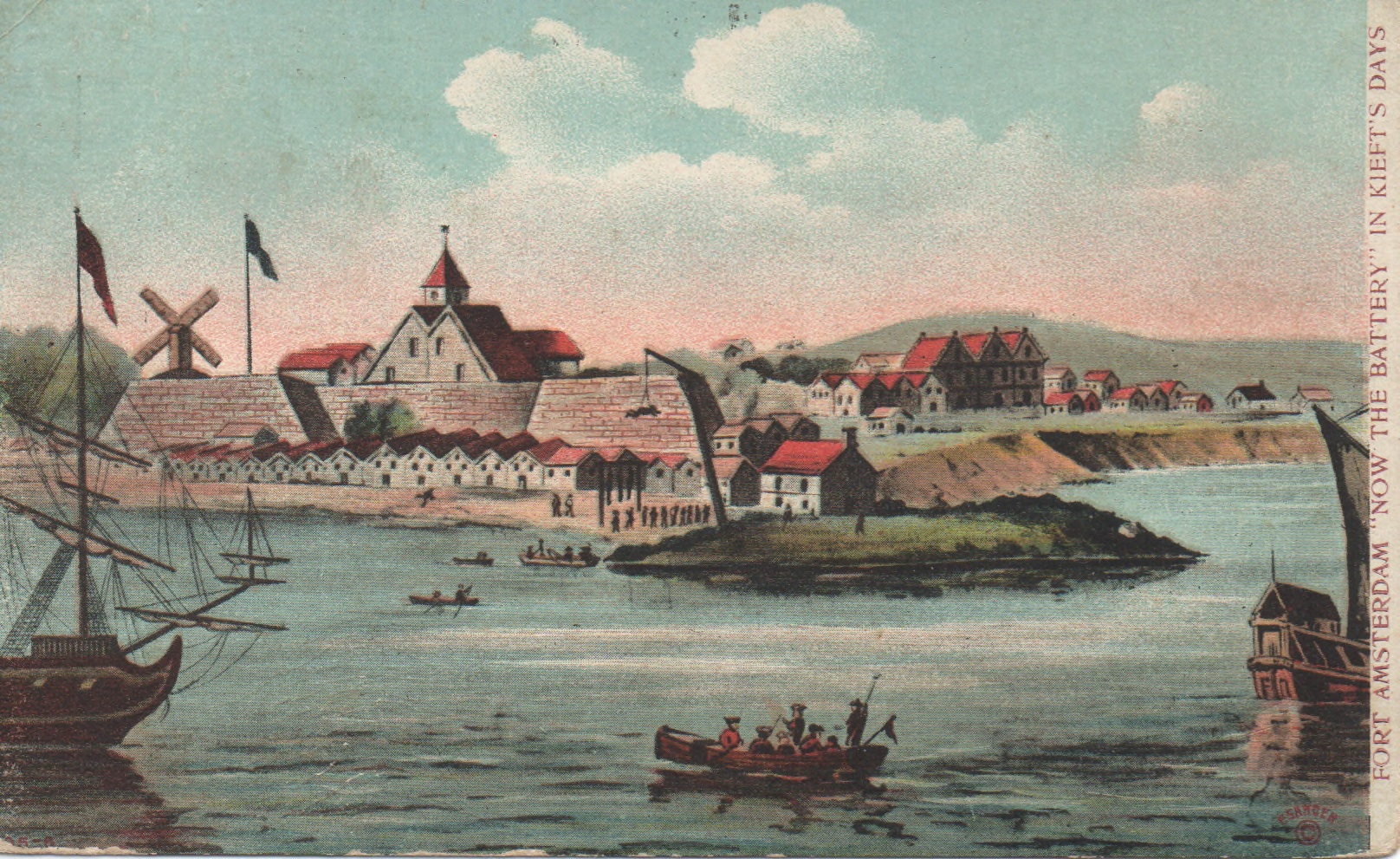 From an 1876 print: ‘Treaty with the Indians at Fort Amsterdam.” Not sure what year this picture depicts but everybody has two legs, so no Peter Stuyvesant!

A drawing of the 1926 purchase of Manhattan between the native population and Peter Minuit. Image is from Popular Science Magazine, 1909.

“Peter Minuit and the Swedes purchasing lands of the Indians.” Illustration dated 1890

William Kieft’s reputation as a vicious tyrant is made apparent here in this 1897 illustration captioned ‘Kieft’s Mode of Punishment.’

From the Delaware Indians website: “A painting by Lenape artist Jacob Parks (1890-1949), which depicts a Lenape family leaving their home on their reservation in Kansas in 1867. This area had been their home for over thirty-five years, and now the government told them they had to move to Indian Territory (now Oklahoma).”

The Smithsonian National Museum of the American Indian is currently living in the Alexander Hamilton U.S. Custom House. It’s a FREE museum so you should stop in anytime you’re in the Battery Park area. 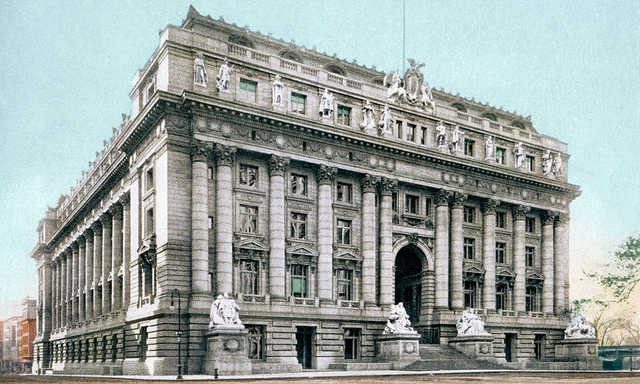 The First Manhattans: A History of the Indians of Greater New York by Robert S. Grumet

The Island At The Center Of The World by Russell Shorto

The Delaware Indians: A History by  C.A. Westanger

Native New Yorkers: The Legacy of the Algonquin People of New York by Evan T. Pritchard

The Official Site of the Delaware Tribe of Indians

Lenape Lifeways: An overview of Lenape life and customs

Removal History of the Delaware Tribe

The Moors Of Delaware

IN A JUNE, 1953 ARTICLE, THE GEOGRAPHER, EDWARD T. PRICE, MAPPED THE LOCATIONS OF THE CHIEF POPULATIONS OF RACIALLY MIXED GROUPS IN THE EASTERN UNITED STATES (SEE FIG. 1).2 THROUGH THE PARTICULAR GEOGRAPHIC DISTRIBUTIONS OF THESE GROUPS, PRICE INDICATED HOW ENVIRONMENTAL CIRCUMSTANCES, SUCH AS SWAMPS OR INACCESSIBLE AND BARREN MOUNTAIN COUNTRY, FAVORED THEIR GROWTH. MANY OF THE GROUPS ARE LOCATED ALONG THE TIDEWATER OF THE ATLANTIC AND GULF COASTS WHERE SWAMPS, ISLANDS, OR PENINSULAS HAVE PROTECTED THEM AND KEPT ALIVE A PORTION OF THE ABORIGINAL BLOOD WHICH GREETED THE FIRST WHITE SETTLERS ON THESE SHORES. OTHER POCKETS OF THESE GROUPS ARE LOCATED FARTHER INLAND, IN THE WESTERN PIEDMONT AREA, BACKING UP AGAINST THE BLUE RIDGE AND ALLEGHENIES. A FEW OF THE GROUPS ARE TO BE FOUND ALONG THE TOP OF THE BLUE RIDGE, AND ON SEVERAL RIDGES OF THE APPALACHIAN GREAT VALLEY JUST BEYOND.

IN ADDITION TO MAPPING THE DISTRIBUTION AND INDICATING ENVIRONMENTAL CIRCUMSTANCES PERTAINING TO THESE RACIALLY MIXED GROUPS, PRICE ALSO NOTED A NUMBER OF COMMON PHENOMENON RELATED TO THEM. THESE GROUPS HAVE BEEN PRESUMED TO BE PART WHITE, WITH VARYING PROPORTIONS OF AMERICAN INDIAN AND NEGRO BLOOD, ALTHOUGH A LACK OF SOLID DOCUMENTATION CONCERNING THE ORIGINS OF A GOOD NUMBER OF THE GROUPS MAKES DETERMINATION OF RACIAL COMPOSITION UNCERTAIN. DUE TO THEIR PARTICULAR RACIAL MIXTURES, THESE GROUPS ARE RECOGNIZED AS OF INTERMEDIATE SOCIAL STATUS, SHARING LOTS WITH NEITHER WRITES NOR BLACKS, NOR ENJOYING THE GOVERNMENT PROTECTION OR TRIBAL TIES OF TYPICAL INDIAN DESCENDANTS.OLD CENSUS RECORDS HAVE INDICATED THAT THE PRESENT NUMBER OF MIXED BLOODS HAVE SPRUNG FROM GREAT REPRODUCTIVE INCREASES OF SMALL INITIAL POPULATIONS OF THE GROUPS.3 THE PREDOMINANCE OF A LIMITED NUMBER OF SURNAMES WITHIN EACH GROUP AT PRESENT IS IN LINE WITH SUCH A CONCLUSION, AND IS ALSO INDICATIVE OF THEIR HIGH DEGREE OF ENDOGAMY, RESULTING FROM THEIR INTERMEDIATE STATUS AND THEIR RELATIVE GEOGRAPHIC ISOLATION FROM THE MAINSTREAM POPULATION. CHARACTERISTICS OF GENERALLY LOWER EDUCATIONAL AND INCOME LEVELS, AS WELL AS LARGE FAMILIES, TEND TO FURTHER MARK THE RACIALLY MIXED GROUPS AS MEMBERS OF THE MORE BACKWARD SECTOR OF THE AMERICAN NATION.

Lesson Content
The Grandfather Quiz
Previous Lesson
Back to Course
Next Lesson
0
0
Your Cart
Your cart is empty
Continue Shopping
Login
Accessing this course requires a login. Please enter your credentials below!
Lost Your Password?